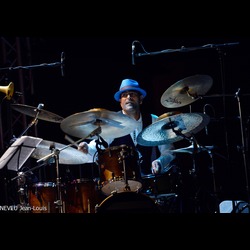 Having shared the stage with Fred Frith, Barre Phillips or Marc Ribot, the insatiable drummer draws his inspiration in the influences instilled in various singular projects around jazz, blues, fusion and improvise music. But mostly at the root of his Egyptian and Burkinabé origins. Here, Africa outshines even more: from faraway tribal rhythms to the brass band parades of his childhood, the creative euphoria is a call of reality through the dream, in a very organic depth.

This new project on the initiative of Ahmad Compaoré gathers the prodigy guitarist Kelyn Crapp from California. Gathered by the American bluesman Lucky Peterson to participate in his latest tour, the two musicians have travelled together around Europe in 2017 and 2018. In the course of their concerts, they have developed a great bond, as much human as artistic. Tonight - with the support of a bassist with an awesome slap - they set the scene on three continents (Africa, America and Europe) proposing a jazz fusion repertoire, tinged with funk and world music.