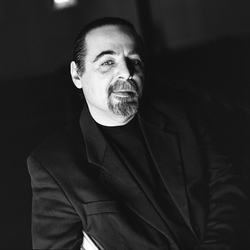 The trio led by pianist Claudio Celada proposes a jazz repertoire mixing personal compositions and reinterpretation of classic themes, including Miles Davis, Sonny Rollins, Wayne Shorter, Chick Corea and McCoy Tyner. Groove and improvisation are the keywords of this ensemble that favours a music with cool overtones, between hard bop, jazz and bossa. In close togetherness, the trio develops a harmonic frame with great density where lyricism and restraint interact. The lightness of the notes contrasts with disrupted rhythms, the crazed conversations follow minimal melodies. A delightful incursion into Jazz and what makes the essence of it: a sense of collective playing, room for improvisation and the pleasure of sharing...

CLAUDIO CELADA: piano
Following classical and jazz piano studies, Claudio Celada moved to Mexico in 1985 where he worked with several jazz ensembles in Mexico City. Back in France, he settled down in Paris for three years and started teaching improvisation in jazz. In 1993, he returned to the South-East and collaborated to many projets with Sylvain Romano, Philippe Festou, Simon Tailleu, Christophe Leloil and Christian Brazier. In 2005, he recorded "Broken Heart" with the Sylvia Versini Octet, followed by "Kimpa Vita" in 2008 with the Rémi Abram Quartet. Since 2013, he participates in the trio Chopin Jazz Project. His next musical adventure is the recording of an album with his own quintet.

AHMAD COMPAORÉ: drums
Of Egyptian and Burkinabé origins, Ahmad Compaoré confirms his singular talent alongside Fred Frith, Marc Ribot, Jamaaladeen Tacuma, Barre Phillips, Camel Zekri or Egyptian choreographer Karima Mansour. With a constant craving for exploration and discovery, he shares his creativeness between music, dance, theatre and digital art. Twice recipient of the Culturesfrance "Hors Les Murs" award, he lived in India and Japan as part of residencies of creation. Free from boundaries, he equally enjoys the most extreme experiences in alternative and improvised music, jazz and fusion.