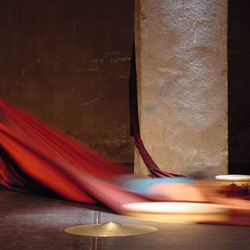 TEMPORAMENT is a dance-music duet by Egyptian choreographer Karima Mansour (MA'AT Company). At the beginning, her intention was to create a  piece on the connection between music and dance. Between musician and dancer, who leads the other, who controls the other? Eventually, the relationship between man and woman prevailed. A duet full of chasings and rebellion: the dancer and her musician - percussionist Ahmad Compaoré - will provoke, arouse and confront one another in a throbbing and electric hand-to-hand struggle. This violence reflects the condition of artist as well as woman in present-day Egypt.

The multiple images and meanings keep ambiguity alive, giving way to several levels of understanding through humour and double-entendre, but the piece does not omit to call into question all the aspects of feminine gender, the relation between man and woman, between music and dance, and their respective tempos:
- The link East-West
- The link body-instrument
- The link oppression-seduction
- The place of women in Mediterranean societies

Created in 2002 at the Dansem festival in Marseilles, winner of a Jury Prize in 2004 at the Cairo International Contemporary Dance Festival, TEMPORAMENT was presented at various festivals worldwide. In March 2009, an updated version was shown at the Arabesque: Arts of the Arab World festival in Washington D.C.

KARIMA MANSOUR: choreography, dance
Born in Cairo, Karima Mansour started Western classical and modern dance at the age of five. After a diploma at the Cairo Film Institute in 1991, she pursued her training at the famous London Contemporary Dance School. Back in Cairo in 1997, she dedicates herself to teaching dance. In 1999, she formed MA’AT for Contemporary Dance, the first independent dance company in Egypt, for which she creates a dozen choreographic performances. Trained in Anglo-Saxon techniques and influenced by Merce Cunningham, she has not forgotten she is Egyptian first of all, searching for a personal language between these various influences and her own culture, without ever becoming cliché or folk.

AHMAD COMPAORÉ: composition, live music
Of Egyptian and Burkinabé origins, Ahmad Compaoré is a musician of freedom. He confirms his singular talent alongside Fred Frith, Marc Ribot, Jamaaladeen Tacuma, Barre Phillips, Camel Zekri or Egyptian choreographer Karima Mansour. With a constant craving for exploration and discovery, he shares his creativeness between dance, theatre and cinema. Twice recipient of the Culturesfrance "Hors Les Murs" award, he lived in India and Japan as part of residencies of creation. Free from boundaries, he equally enjoys the most extreme experiences in alternative and improvised music, jazz and fusion. Involved in many projects, he is currently a drummer within Lucky Peterson's quartet.